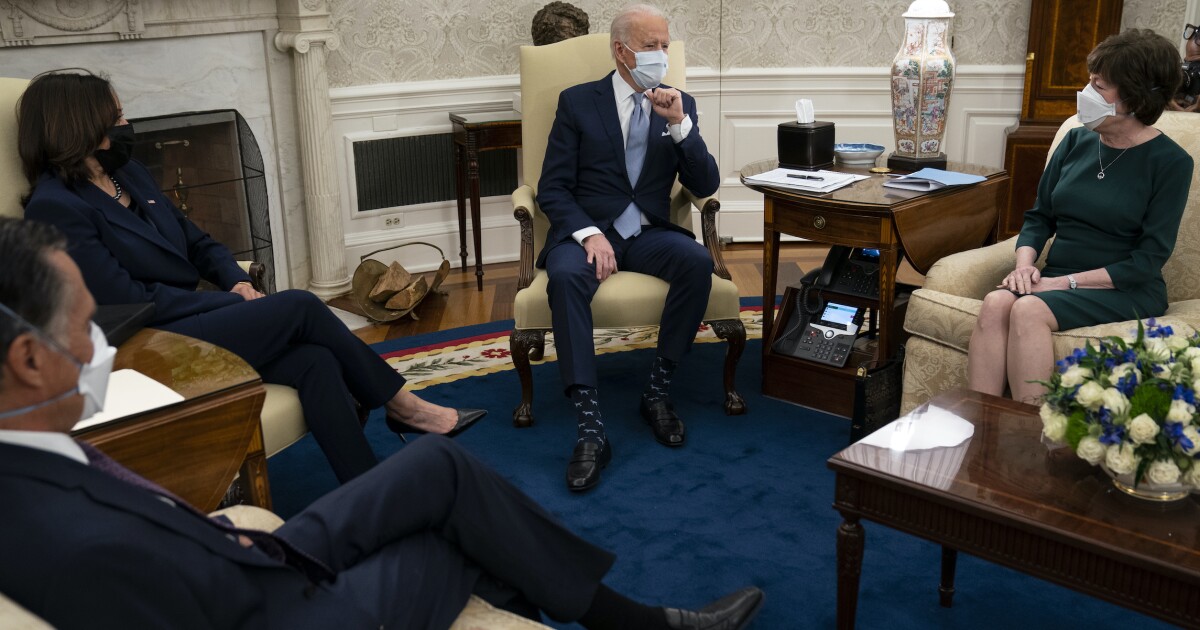 Despite President Joe Biden’s election-year appeal to his self-described strengths as a bipartisan deal-maker, congressional Democrats may be poised to pass another $2 trillion spending package on a party-line vote.

No definitive decision has been made on how best to pass the infrastructure package that is the opening salvo of Biden’s American Jobs Plan. But Senate Majority Leader Chuck Schumer says the Senate parliamentarian ruled Monday that the chamber could advance the measure through reconciliation, a budgetary tool that allows legislation to pass with 51 votes rather than the 60 necessary to overcome a Republican filibuster.

That would mean Democrats would not need Republican support to pass the $2.25 trillion spending bill if they can hold their 50 senators together, shortly after enacting a $1.9 trillion measure without any GOP votes. Vice President Kamala Harris could send the infrastructure legislation to Biden’s desk with her tie-breaking vote.

NOT BUSINESS AS USUAL: CORPORATE AMERICA TURNS AWAY FROM GOP

Schumer, a New York Democrat, hailed the ruling as “an important step forward that this key pathway forward is available if needed.” White House press secretary Jen Psaki told reporters that Biden was still “open” to Republican input on the bill.

Biden has said that he would prefer legislation be bipartisan, but he also isn’t going to let Republicans slow down or substantially alter his spending plans. He has often pointed to poll numbers suggesting his policies are more popular with rank-and-file Republican voters than elected GOP officials in Washington.

Last year, Biden assured liberals who were skeptical of his candidacy that he would not waste opportunities created by a Democratic Congress. His main rival for the nomination, Vermont Sen. Bernie Sanders, offered to help make Biden’s the “most progressive” administration since President Franklin D. Roosevelt.

But Biden also made a pitch to suburban voters in the swing states that he would not be too radical. He pointed to his 36 years in the Senate and eight additional years of work on Capitol Hill as vice president under Barack Obama as evidence that he knew how to reach across the aisle and get things done.

One of Biden’s top Republican endorsers, former Ohio Gov. John Kasich, appealed to GOP voters who were worried that a Democratic president would be too liberal. “They believe he may turn sharp left and leave them behind,” Kasich said. “I don’t believe that. I know the measure of the man Reasonable. Faithful, respectful, and no one pushes Joe around.”

Biden made unity a major theme of his inaugural address. “We can see each other not as adversaries but as neighbors,” he said. “We can treat each other with dignity and respect.” The White House continues to emphasize its meetings with GOP lawmakers as a sign of keeping that commitment.

“As you all know, he's already had two bipartisan congressional meetings on infrastructure in the Oval Office, and he plans to continue speaking with leaders from both sides of the aisle to get their input, either on the phone this week or when they return,” Psaki told reporters on Monday. “He looks forward to welcoming members to the Oval Office again.”

Biden met with Republican senators at the White House on stimulus talks before he signed the “American Rescue Plan” into law. They quickly found that they were over $1 trillion apart, and the president told them he did not want a smaller package. The bill ended up being passed with all Democratic votes.

That could happen again on infrastructure. Republicans would prefer a smaller, more targeted bill focused on traditional projects such as roads, bridges, and ports. The Biden administration is defining infrastructure to include things such as broadband and some climate initiatives. But the White House must first win over Sen. Joe Manchin, a West Virginia Democrat who has balked at some of the provisions, including the corporate income tax hike intended to help pay for the new spending.

Republicans view Biden’s approach as a broken campaign promise. “The first 100 days of a new administration sets the tone for the next few years,” said GOP strategist Bradley Blakeman. “Clearly, Biden and his administration are tone deaf to what the American people want and expect from Washington. Biden doesn’t even attempt bipartisanship.”

Senate Minority Leader Mitch McConnell, a Kentucky Republican who served with Biden for a quarter-century, has complained about a lack of overtures from the White House. “The fact what he has not met with Republican congressional leaders speaks volumes,” Blakeman said. “You would think as a creature of the Senate, the president would be more like LBJ, the master of negotiation.”

Instead, Biden has invoked President Lyndon Johnson in discussing the scope of his legislative ambitions, envisioning the biggest spending increases since the Great Society. Democrats counter that GOP obstructionism has prevented meaningful bipartisan compromise, with one party operative telling the Washington Examiner that voters will not care about process questions if the administration is successful in battling COVID-19 and rebuilding the economy. “They'll remember that Republicans voted no,” the operative said.

Democrats hold narrow majorities in both houses of Congress that are already in jeopardy in next year’s midterm elections. They sacrificed their House majority over a decade ago to pass Obamacare, which Republicans failed to repeal when they had unified control of the federal government from 2017 to 2018.

Still, this approach could limit opportunities for Biden to build bridges across the partisan divide. Infrastructure bills have frequently garnered bipartisan support, and former President Donald Trump talked about the possibility of passing one during his term, though it did not come to fruition.

“It is a missed opportunity to actually come together and focus on areas where there is real opportunity for cooperation,” said Christian Ferry, a Republican strategist who advised the Biden-Harris transition team on outreach to the GOP. “Instead, both sides have decided on an all-or-nothing approach. Republicans are betting there is enough noninfrastructure related progressive policy to justify their no votes, Democrats that the more popular projects protect their yes votes from swing-voter blowback on the other items while energizing their base.”