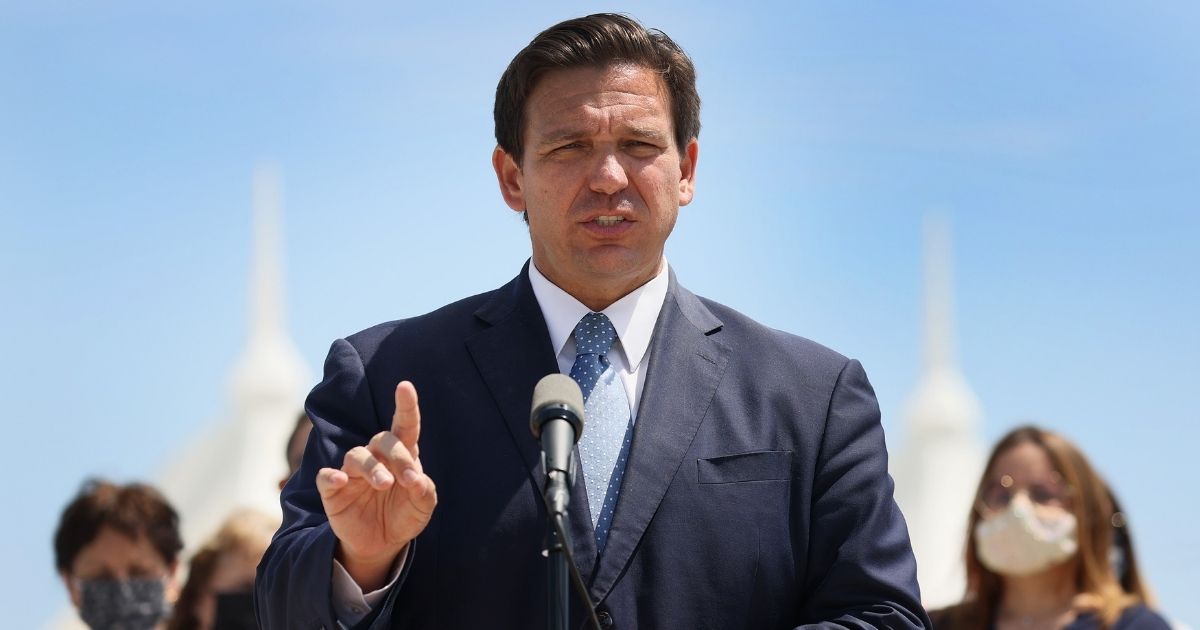 Republican Gov. Ron DeSantis of Florida unloaded on CBS News on Wednesday, calling on “60 Minutes” to admit that an April 4 hit piece it aired about the governor and Florida’s vaccine rollout was “false” for implying there was corruption in his state’s efforts to vaccinate seniors.

“60 Minutes” used deceptive editing and omitted key facts to mislead viewers by suggesting a $100,000 donation from the Florida grocery chain Publix to the governor’s campaign PAC was related to Publix later partnering with the state to issue vaccines.

CBS implied Publix was given exclusive rights to distribute vaccines to seniors in Palm Beach County at the expense of desperate residents in the area. That report was broadcast despite the fact that numerous other retailers were given state contracts long before Publix was considered a vaccine partner.

The bogus segment was summarily called out by even left-wing media pundits and a Democratic elected official — but “60 Minutes” has yet to correct the record or apologize.

That was all more ammunition for DeSantis on Wednesday morning when he joined Fox News’ “Fox & Friends” to nail the formerly trustworthy news show.

“They’ve issued a lot of mealy-mouthed statements since the episode aired,” the governor told Fox News. “You know, they knew what they were putting on the air was false, and that’s the problem that they have.”

DeSantis pointed out that CBS omitted information from sources, including Democrats, that would have sunk the story it was trying to tell.

“60 Minutes” was criticized by CNN’s Oliver Darcy and Chris Cillizza and Erik Wemple of The Washington Post. Meanwhile, Tom Jones of the Poynter Institute, opined “it doesn’t appear as if DeSantis did anything wrong. If he did, ’60 Minutes’ failed to provide enough information, context or evidence that he did.”

Do you consider DeSantis a 2024 presidential contender?

The Democratic mayor of Palm Beach, Dave Kerner, also condemned the “60 Minutes” segment and said his side of the non-scandal it attempted to fabricate was ignored.

“I watched the 60 Minutes segment on Palm Beach County last night and feel compelled to issue this statement. The reporting was not just based on bad information — it was intentionally false,” Kerner said in a statement. “I know this because I offered to provide my insight into Palm Beach County’s vaccination efforts and 60 Minutes declined.”

According to DeSantis, it’s time for CBS to own up to the fraud it attempted to pass off as legitimate journalism.

“They know that they got caught, so they never even addressed that, they just issued these mealy-mouthed statements, but what I would say to ’60 Minutes’ is, and the American people, they have so much contempt for their viewers to try to gaslight them like this,” the governor told Fox News.

“You know what, admit that it was false. That’s the responsible thing to do,” he said.

DeSantis then stated the obvious: CBS is part of the media arm for the Democratic Party.

“These are corporate media operatives, basically,” he said. “They had a political mission to smear me. They thought that they could do it, drive by and just go on to the next target.

“But I have a platform. I have the ability to fight back. We have done that, we’re going to continue to do that.”

“60 Minutes” has offered no apologies for its debunked reporting implying DeSantis engaged in corruption. The only mention of its hit piece on the governor since it aired came on Sunday when correspondent Sharyn Alfonsi mentioned that the segment drew the ire of longtime viewers — while also claiming it received positive feedback from other viewers.

One thing remains clear: CBS picked a fight with the wrong governor.