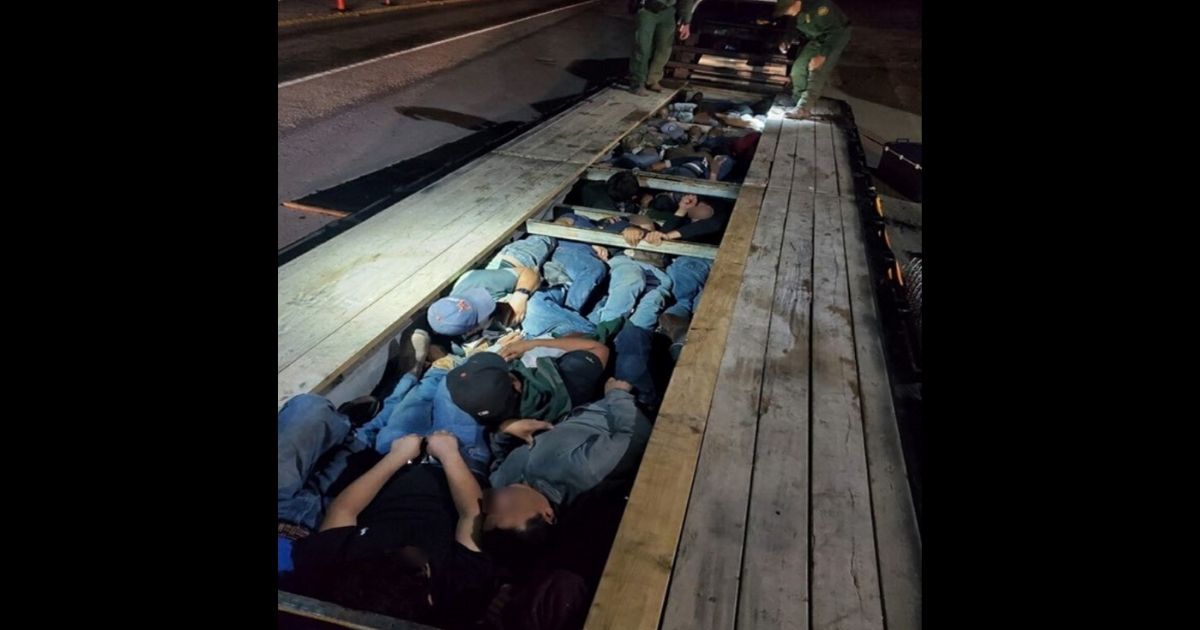 Amidst the largest illegal immigration surge in recent history, U.S. Customs and Border Protection is under far more pressure to enforce border security. Unfortunately, an oft-ignored aspect of Border Patrol is how often the law enforcement agency saves lives.

Chief Patrol Agent Austin Skero of the Del Rio, Texas, sector tweeted photos on Tuesday of 20 illegal immigrants Border Patrol agents discovered packed under the floorboards of a trailer. The worst part, though, is that two children were found after inspecting the trailer.

Yesterday, a Del Rio Sector K9 alerted to this trailer at one of our checkpoints. An inspection located 2 children (ages 10 and 15) trapped under the trailer boards with 18 adults. With temperatures on the rise, smuggling attempts like these have a high potential to turn deadly. pic.twitter.com/Bf5X9oDijK

The children, ages 10 and 15, were jammed with adults into a long container underneath the floorboards. As if being packed in like human sardines wasn’t bad enough, Skero noted, “With temperatures on the rise, smuggling attempts like these have a high potential to turn deadly.”

Skero tweeted another set of photos on Tuesday, seemingly of a separate incident, where it was revealed three people were locked in a truck with one person “trapped inside a padlocked toolbox.”

Technology continues to assist, even at our checkpoints. Our agents encountered this vehicle at an immigration checkpoint and became suspicious. Tech revealed a person trapped inside a padlocked toolbox. A search revealed a total of 3 trapped in the truck with no means of escape. pic.twitter.com/OYTder2Uzd

The reality of the situation is horrifying — smuggling attempts like the ones Skero reported on are likely far more common than anyone would hope. Worse, though, is that if Skero’s sector lost funding and wasn’t able to discover these trapped immigrants, smugglers likely would’ve gotten away with it and made tens of thousands of dollars from the move.

Will Biden ever acknowledge the human cost of his decisions?

Thankfully, this didn’t happen, but Biden’s immigration policy and general neglect of the border make it an ever-increasing risk.

Fortunately for them, Biden doesn’t seem to have a strong stance on human life either, continuing to value woke optics over the lives of both human trafficking victims and everyday Americans.

The president’s Jan. 20 executive order to revoke emergency status from the border very well could have changed the outcome of the inspections Skero reported on. The proposal ordered an immediate end to the construction of the border wall system and additionally removed thousands of dollars in funding from federal and local law enforcement.

RELATED: Biden Admin May Be Skirting the Law to Avoid Deporting Illegal Immigrants

Biden’s negligence of what is really happening at the U.S.-Mexico border isn’t just ridiculous from a political standpoint — it endangers life.

The rest of the administration is following in Biden’s footsteps, it seems, as Vice President Kamala Harris hasn’t even stepped foot on the southern border in the weeks she’s been assigned to the crisis, or “situation” depending on which aisle you lean toward.

Former House Speaker Newt Gingrich put it best in a Monday interview with Fox News, explaining, “They wanted Harris to be in charge of the border because they knew she wouldn’t do anything.”

Gingrich is spot-on — members of the Biden administration, with the potential exception of Secretary of Homeland Security Alejandro Mayorkas, don’t want to do anything substantial about the border. They’ll simply continue to ignore the real, human cost of their partisan decisions as they pretend to care about the lives of Americans.

Thankfully, Border Patrol agents are willing to risk their lives daily for thousands of Americans they’ll likely never meet. If only our president could say the same.