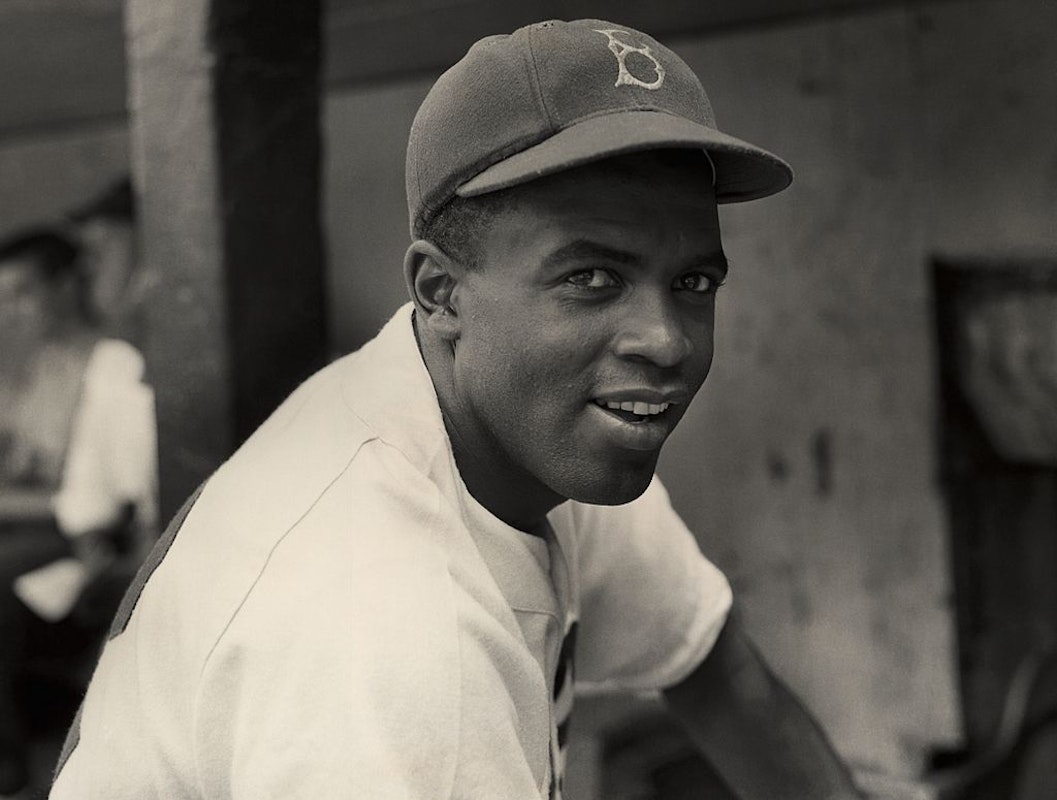 Every year since 2004, April 15th is marked on the calendar as a day for baseball fans worldwide to remember the great Jackie Robinson. On this date in 1947, Robinson broke baseball’s color barrier when he made his historic MLB debut.

Today we pay homage to the legacy and courage of a trailblazer, Jackie Robinson. #Jackie42 pic.twitter.com/mxaidbah9E

“Jackie Robinson Day” is celebrated at ballparks around the country as a day to remember Robinson and what he went through in order to pave the way for players of color everywhere.

Robinson would go on to have a ten-year, Hall of Fame career, winning the NL Rookie of the Year in 1947, NL MVP in 1949, and appearing in the All-Star Game six times.

“The Handshake of the Century”

Before Robinson made his Major League debut, he played for the Montreal Royals — the top minor league team in the Brooklyn Dodgers organization. On April 18, 1946 Robinson took the field against the Jersey City Giants in Jersey City, New Jersey.

Robinson had struggled during spring training. He’d hurt his throwing arm and was having a difficult time at the plate, all while dealing with unending bigotry from fans and teammates alike. The pressure to perform was overwhelming as he attempted to pave the way for players of color moving forward.

In his second at-bat, Robinson hit a fastball over the left field stands for a home run. As he crossed home plate, George Shuba, a white player who followed Robinson in the batting order, reached out and shook Robinson’s hand.

The “handshake of the century,” as it came to be known, is memorialized by sculptor Marc Mellon in a seven-foot statue in Shuba’s hometown of Youngstown, Ohio.

“Well, we’ve had other important handshakes, internationally and here at home,” Mellon told CBS Sunday Morning in September of 2020, “but this was a harbinger of the civil rights movement to come.”

Robinson broke the Major League color barrier on April 15, 1947 as his Brooklyn Dodgers took on the Boston Braves. Robinson went 0-3 with a run scored in a 5-3 Dodgers victory.

Robinson famously said, “If they are all like this, I’m going to have a hard time making this league.”

5) During the game, Robinson is called out at first, hits a fly ball to left, hits into a double play, and only makes it to base when a bunt is mishandled. He says about the day, “If they are all like this, I’m going to have a tough time making this league.” #JackieRobinsonDay pic.twitter.com/SGL8Y20ajC

In the first game of the 1955 World Series, Robinson – in his second to last season in Major League Baseball – got the series off to a wild start by stealing home against the New York Yankees.

The famous moment was hotly debated as it was a bang-bang play at the plate. Did Yankees catcher Yogi Berra get his glove down before Robinson touched home plate? Umpire Bill Summers didn’t think so and the legendary moment lives on in the hearts and minds of sports fans everywhere.