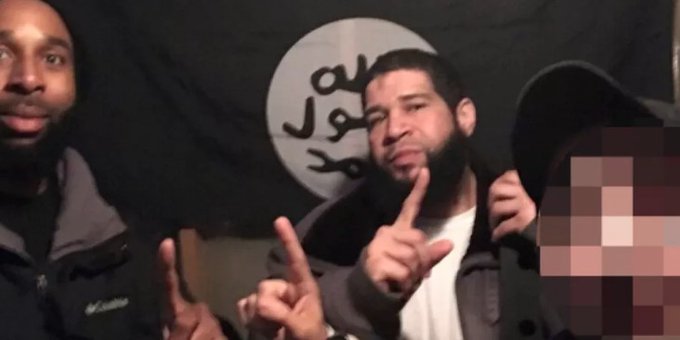 From the way Democrats ignore Islamic terrorism, the idea it exists seems like an anachronism in 2021, but one federal conviction proves the threat still looms as large as ever in America.

Zion, Illinois, resident Edward Schimenti, 39, was sentenced on Friday to 13 and a half years for his role in a conspiracy to send materials overseas to help the Islamic State make bombs, the Chicago Sun-Times reported.

The FBI began investigating Schimenti and co-conspirator Joseph D. Jones based on their online activity, including one post by Schimenti saying, “Islamic State will control your country, matter of fact, Islam will dominate the world!!”

The pair were originally charged in 2017, although U.S. District Judge Andrea Wood determined that Schimenti was the one who had a “better idea of what he was getting himself into.”

Both suspects claimed the government entrapped them in what investigators call a “ruse scenario” where undercover agents embed themselves in the suspects’ lives to get a sense of their true intentions and find out what they’re capable of doing.

However, it was clear that Schimenti meant business when he helped another person, who turned out to be an FBI informant, collect cellphones he believed would be sent overseas to be used as detonators.

He declined reimbursement for the phones and told the informant “I want to see blood flowing, either way.”

On another occasion, when he thought he was seeing the informant off to Syria at the airport, he said “drench that land with they, they blood.”

According to WLS-TV, Schimenti and Jones had also “fantasized” about throwing gay people off of Chicago’s tallest skyscraper and attacking the Great Lakes Naval Base, which houses the only boot camp that exists for the military branch.

Schimenti, also known as Abdul Wali, even posed in front of a sign at a state park holding the ISIS flag.

Jones, 38, was only sentenced to 12 years for his part in the plan.

These homegrown Islamic terrorists are dangerous, but Democrats are too busy denying it or trying to convince America that the real threat comes from former President Donald Trump and his supporters.

Even the likes of antifa — a domestic terrorist group Biden said was only an “idea” during a debate — can destroy cities for its political ends without being slapped with that word, let alone operatives who are working for jihad against America.

It’s telling that Iranian President Hassan Rouhani, who leads a country that is literally a state sponsor of terrorism, celebrated Biden’s inauguration in January and was happy to see Trump go.

RELATED: We've Got It: Read the Full Press Release About Suspected Terrorists Arrested at Border That DHS Deleted

And true to expectations, the Biden administration has been working ever since to resurrect the disastrous nuclear deal with Iran which Trump had pulled out of and which the nation had flouted anyway.

Biden also couldn’t wait to roll back Trump’s travel ban on certain countries including Iran and other nations that sponsored terrorism, which the left called a “Muslim ban” rather pointing to the terrorism justification Trump had.

Of course, former President Barack Obama — Trump’s predecessor who Biden served under as vice president — wouldn’t use the words Islamic terrorism to describe the phenomenon despite many incidents involving ISIS that occurred during his presidency, so it’s no shock that Biden is continuing the denial.

Do you think Islamic terrorism is still a threat to the U.S.?

Worse yet, the Biden administration is currently overseeing a surge of migrants at the U.S.-Mexico southern border that creates the perfect opportunity for foreign extremists to flood in undetected among the deluge of other illegal immigrants.

The frightening part is that for every Schimenti or Jones who is caught, there are untold numbers of people living on American soil who are plotting the country’s destruction and hoping for bloodshed in the name of Allah.