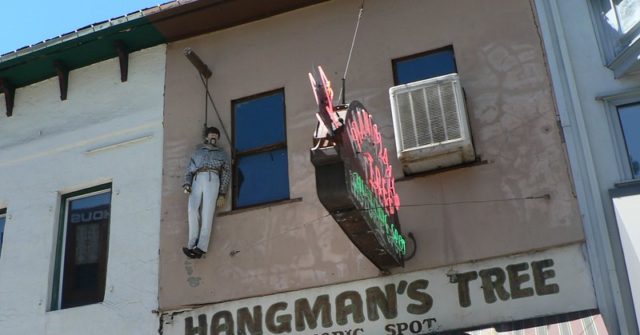 The city of Placerville, California, known as “Old Hangtown” since the days of informal justice among miners during the Gold Rush, will replace the noose in its municipal logo after a unanimous vote by the city council on Tuesday evening.

Though the symbol has no racial connotations, Placerville leaders decided that the noose was too provocative in the wake of the death of George Floyd in the custody of Minneapolis, Minnesota, police last year. The Los Angeles Times reports:

It’s widely held that the city earned its nickname in 1849 after three men accused of robbery and attempted murder were sentenced to death by hanging. Those men — a Chilean national and two French nationals — spoke no English and were not present at the trial where the death sentence was handed down, according to a history presentation by Brendan Lindsay, an associate professor of history at Sacramento State.

The group of miners who ordered the hangings presented no evidence against the trio “beyond their fitting a general description,” Lindsay said in the presentation prepared at the request of Placerville officials.

A white oak tree at the center of the town was used as a gallows. The stump of that tree, all that remains, sits in the cellar of a bar on Placerville’s Main Street, “named — quite aptly — The Hangman’s Tree,” according to the city’s website. The stump was designated a historical landmark in the 1930s.

A dummy named George hangs from a noose above the second story of the bar. The greeting “Old Hangtown” still welcomes visitors to the city on a large sign along Highway 50.

The city council had postponed a decision to remove the noose from the logo last year, amid heated local debate. Sacramento-based NBC affiliate KCRA reported that local Black Lives Matter activists had rallied this week in support of changing the symbol, hoisting signs above state highway 50 that read “Lose the Noose.”

The cost of replacing the noose in local signs and on other municipal symbols will be roughly $3,500, plus $1,800 in labor, according to the Times.

Joel B. Pollak is Senior Editor-at-Large at Breitbart News and the host of Breitbart News Sunday on Sirius XM Patriot on Sunday evenings from 7 p.m. to 10 p.m. ET (4 p.m. to 7 p.m. PT). His new novel, Joubert Park, tells the story of a Jewish family in South Africa at the dawn of the apartheid era. His recent book, RED NOVEMBER, recounts the 2020 Democratic presidential primary from a conservative perspective. He is a winner of the 2018 Robert Novak Journalism Alumni Fellowship. Follow him on Twitter at @joelpollak.