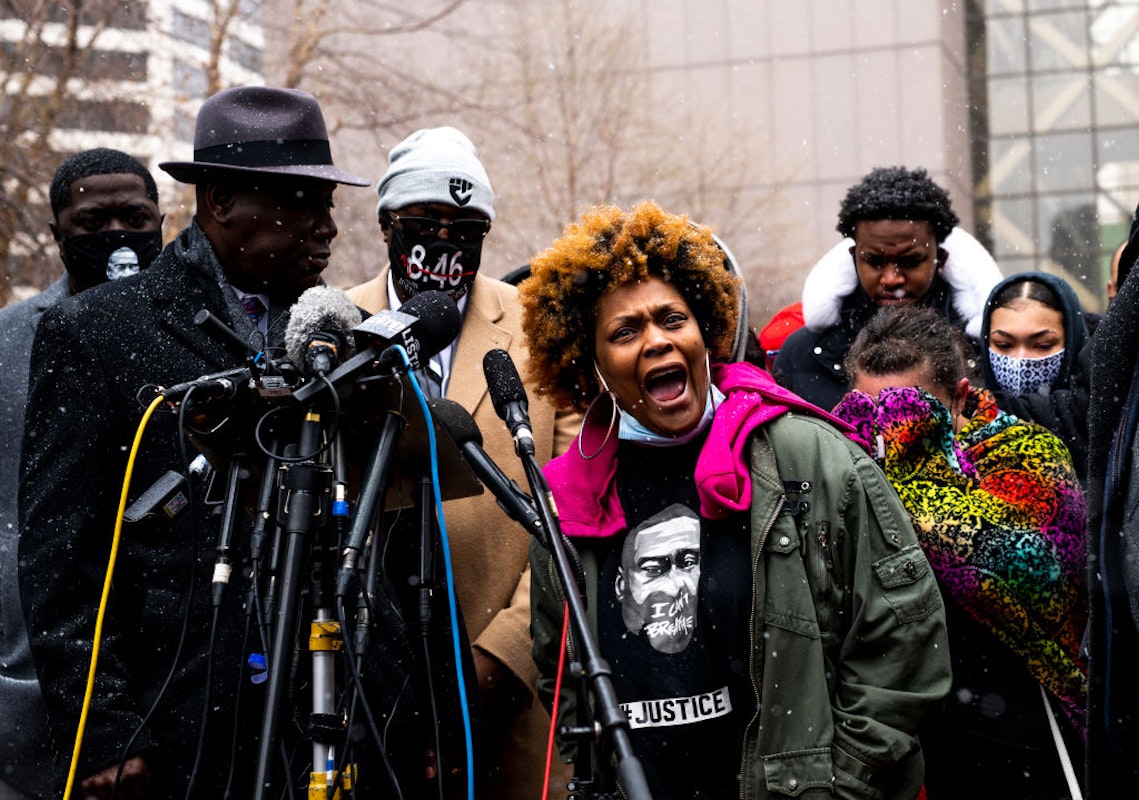 Nyesha Wright, the aunt of now-deceased 20-year-old Daunte Wright, on Tuesday revealed that her family has connections to the George Floyd family.

“I wear this shirt and the craziest thing is to find out today that my family has connections to this man, to this family,” she said, holding up the t-shirt, during a press conference. The shirt included a picture of George Floyd with the word “justice” underneath.

“His girlfriend was the teacher for my nephew,” she said. “My nephew was a lovable young man.”

Nyesha Wright, aunt of Daunte Wright, led family and supporters earlier today in a “say his name” chant as she delivered emotional remarks in Minnesota: “My nephew was 20 years old. I don't care what nobody got to say about him. He was loved. He was ours.” https://t.co/Z9KZLQYqpS pic.twitter.com/y117pnI3hC

“Taser! Taser!” Officer Porter yelled in the video. She then fired her service gun.

“Oh, sh**! I shot him,” she gasped after she realized she had shot the suspect.

Based on what the body cam footage revealed, Chief Gannon concluded the shooting was accidental.

“It is my belief that the officer had the intention to deploy their taser, but instead shot Mr. Wright with a single bullet,” Gannon said during a press conference on Monday. “This appears to me, from what I viewed, and the officer’s reaction and distress immediately after, that this was an accidental discharge that resulted in a tragic death of Mr. Wright.”

Potter, a 26-year veteran of the Brooklyn Center Police Department, announced her resignation on Tuesday, saying it was “in the best interest of the community” if she did so. Gannon’s resignation quickly followed suit and was announced during Brooklyn Center Mayor Mike Elliot’s Tuesday press conference.

Police stopped George Floyd last year on suspicion of possessing a counterfeit bill. During his interaction with Minneapolis police officers, Floyd allegedly resisted arrest. Office Derek Chauvin pressed his knee into Floyd’s neck for nearly nine minutes. Floyd later died. A medical examiner ruled Floyd died of asphyxiation related to the incident, but further testimony from the Chief Medical Examiner suggests Floyd may have been affected by drugs in his system at the time of his arrest.

Methamphetamine, in addition to fentanyl, was found in his system. On top of the drugs, Floyd also suffered from a heart condition, The Daily Wire reported. Others have claimed Floyd died from asphyxiation.