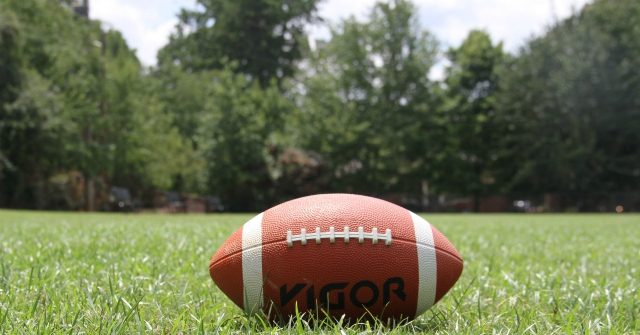 MOLINE, Ill. (AP) — A Black football player at an Illinois high school captured on video sitting in a locker littered with banana peels after a teammate threatened to break his knees if he didn’t comply says he’s “fine” and wants people to “stop talking about the incident.”

The Moline High School student, who was not identified because he’s a juvenile, also said in a statement released through the Rock Island County State’s Attorney’s Office that those football team members involved in the incident have apologized, Davenport, Iowa, television station KWQC-TV reported.

A Black high school student and football player was forced to sit inside a locker filled with banana peels pic.twitter.com/tn8irhOMxb

“I love the football team I’m on and they’re good guys. I know that personally. I talked to the people involved individually and they apologized. We had a heartfelt talk about it and I told them how I felt. So please don’t harass, bully, or threaten them at all,” the student said Monday in the statement.

An 11-second video that’s been shared widely on social media shows another football player, whose hand can be seen but face doesn’t appear, threatening the Black player to sit in the locker “or I’ll break both your knees.” When the player sits down, others can be heard shouting, “Yeah!”

Moline Police Chief Darren Gault called the incident a “disturbing racist scene.” He said the department’s investigation determined that the people involved were teammates “of both different and similar races to the victim.”

Those findings have been turned over to the Rock Island County State’s Attorney Dora Villarreal, who said in Monday’s statement that the case has been referred to her office’s juvenile division “for appropriate action.”

She urged the public to stop sharing the video on social media and to respect the student’s privacy.

The Black student added in his statement that he appreciates the concern the incident generated but he’s hoping “to get my life back together, and my student-athlete life back on track.” He added that he wants to be treated “as a human first, not a victim.”

“I want to make it known that I’m fine. Everyone is worried about me and showing concern for me and I really appreciate it. Second, can everyone please stop talking about the incident and video? I understand everyone wants justice for me and they want what they think is right to be done, but I already made my feelings known to the police and my friends about how I feel about everything,” he said in the statement.

The Moline-Coal Valley School District continues to conduct a “school-based investigation” of the incident, Superintendent Dr. Rachel Savage said during Monday’s school board meeting, adding that because the students involved are minors “the details of student discipline are private and protected by federal law.”

“While outcry over the incident understandably calls for answers and justice, few details of this school-based investigation can actually be revealed. This must not be misunderstood or mistaken for lack of action,” Savage said.

Moline is located about 160 miles (257 kilometers) west of Chicago along the Illinois-Iowa border.

This story has been corrected to show the last name of Rock Island County state’s attorney is ‘Villarreal.’