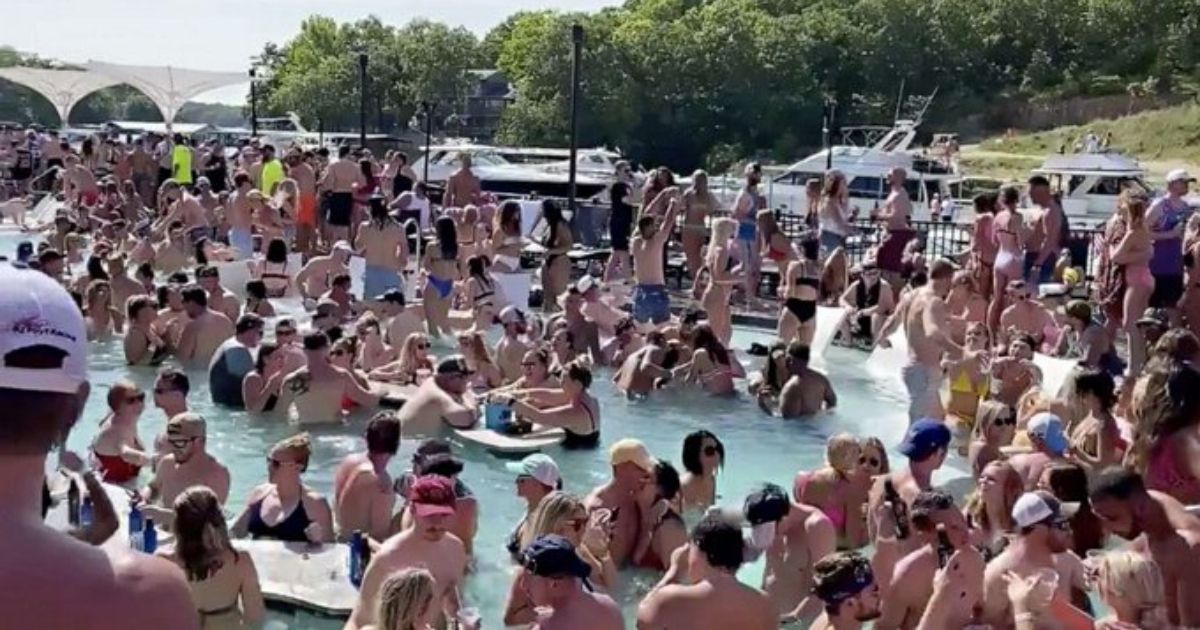 The Washington Post published an article Tuesday in which it was silently surrendered that media hysteria last spring misled people about the risks of going outdoors in the early days of the coronavirus pandemic.

Remember all of the COVID-19 panic when people dared to enjoy time in the sun in places such as Missouri and Florida?

Video showing partiers crowded together in a pool at the Lake of the Ozarks, Missouri, has raised concerns about a lack of social distancing https://t.co/0ctd6jspDs

“Events like the Lake of the Ozarks gatherings … can serve as a stem off of which the next 1,000-10,000 cases arise from,” Dr. Nahid Bhadelia says after large crowds gathered at Lake of the Ozarks over Memorial Day weekend amid the coronavirus pandemic. https://t.co/rYPAKoaa7u

Health officials in Missouri are alerting those who attended Memorial Day weekend parties at the Lake of the Ozarks that a partygoer there has tested positive for the novel coronavirus. https://t.co/f9md6yxlGq

Remember when CNN tried to make Independence Day about Americans being dependent on its coverage to guide our lives?

Florida is reporting a record 11,445 new coronavirus cases today. @boris_sanchez reports from Clearwater Beach, Florida, where many people have told him they feel comfortable coming to the beach to celebrate Independence Day. https://t.co/9w7CHCOIpI pic.twitter.com/Qds6iWV3R3

At least some people at The Post remembered, and they corrected the mainstream media’s fear-peddling. Although the correction is a year late, it is preferable to have it late rather than never.

“A year into the pandemic, it’s even more clear that it’s safer to be outside,” the article proclaimed in a headline telling many people what they already knew.

Washington Post reporters Karin Brulliard and Lenny Bernstein concluded that being outdoors around others in the sunshine and the elements is safer than hunkering down, turning on the TV and breathing into a paper bag while lathered in hand sanitizer.

“For more than a year, the vast majority of documented coronavirus clusters have been linked to indoor or indoor-outdoor settings — households, meatpacking plants, nursing homes and restaurants,” they wrote. “Near-absent are examples of transmission at beaches and other open spaces where breezes disperse airborne particles, distancing is easier, and humidity and sunlight render the coronavirus less viable.”

RELATED: Kamala Harris to Travel to Mexico and Guatemala, But Continues to Ignore Southern Border

The Post mentioned the much-publicized Memorial Day weekend gathering at the Lake of the Ozarks in Missouri — which CNN and probably many of its viewers seemingly hoped would be a mass casualty event.

Those festivities didn’t have a Jonestown-esque body count, and when it became apparent there wouldn’t be one, the narrative was quietly dropped.

CNN wasn’t alone in pushing fear about going outside, but it was arguably the loudest. In that same week, the network would move on to bigger fish when George Floyd died while in police custody in Minneapolis, and CNN pivoted to stoking race riots and encouraging leftists with molotov cocktails to gather in America’s cities to burn and loot.

CNN’s Chris Cuomo: “Please, show me where it says protesters are supposed to be polite and peaceful.”

As riots and looting have broken out in cities across the country, this is the message the brother of New York governor Andrew Cuomo shares at the top of his show. pic.twitter.com/ZZ47zpyVlx

Kudos to The Post for following up on the gatherings in Missouri.

“Randall Williams, director of the Missouri Department of Health and Senior Services, said an extensive tracing effort found no major coronavirus clusters connected to the weekend, though a few individuals were infected,” Brulliard and Bernstein reported.

“From that event that attracted national attention, we didn’t see any kind of spreader or superspreader even,” Williams said.

“What a difference a year makes. The beaches were even busier this year, but officials say there were no talks of closure. There was also far less outcry.”

Have you avoided going outdoors because of the coronavirus?

Brulliard and Bernstein concluded that was for “good reason.”

“Evidence that the coronavirus transmitted less effectively outside emerged early in the pandemic. And as the nation settles into its second year with the virus, that understanding is increasingly recognized in public policies,” the report said.

“Ballparks are welcoming fans. Open-air graduations and county fairs are being planned. Outdoor gathering limits are rising or being dropped altogether. The playgrounds and public lands that were off-limits last spring are mostly open.”

It was always obvious when looking at early data and using common sense that sun-filled, open-air environments were much less conducive to the spread of the coronavirus.

It’s nice to have The Post join the party, even if it’s late.

Big government tyrants have spent a year attempting to lock people down, and they still want us all crammed in confined spaces, out of shape and Vitamin D deficient (not to mention disarmed).

Any help with pushing back at future anti-science lockdowns, which The Post is offering here, is much welcomed.