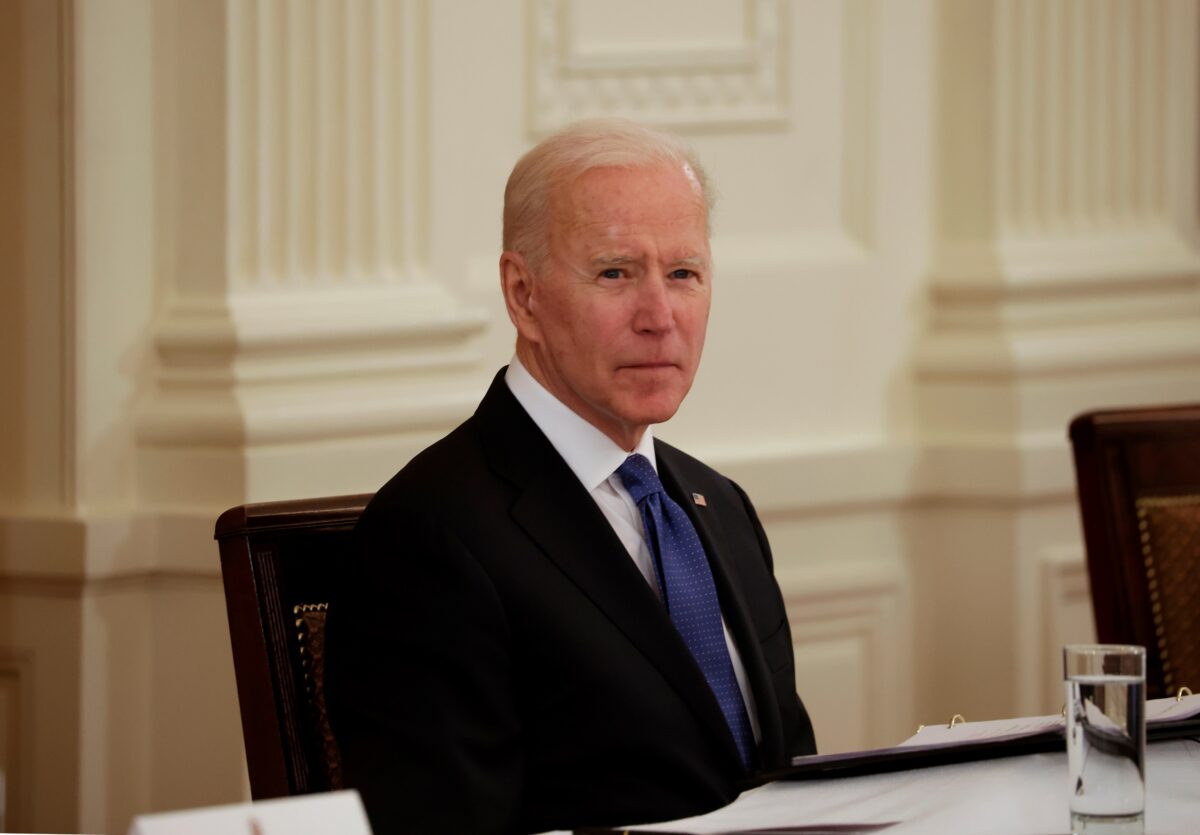 President Joe Biden and Vice President Kamala Harris are set Monday to convene with a bipartisan group of Congress members and discuss the administration’s infrastructure proposal.

The meeting will take place in the Oval Office of the White House in Washington, according to the official White House schedule.

The president and vice president “will discuss the need for a bold, once-in-a-generation investment in America to put millions of people to work,” the White House said.

Biden recently unveiled a $2.2 trillion infrastructure plan but Republicans largely oppose it because it includes items they argue have little to do with infrastructure, such as funding in-home care for elderly Americans, though they’ve signaled they want to negotiate a smaller package.

“Only about six percent of the president’s proposal actually goes to what everyday Americans would describe as infrastructure. If Democrats are interested in roads, bridges, highways, and perhaps broadband, there is a deal to be had there,” Sen. John Thune (R-S.D.), the GOP Senate whip, said on “Fox News Sunday.”

Wicker noted that a group of Republicans tried reaching a compromise with Biden on the latest COVID-19 relief package, presenting a $600 billion counter-proposal. In the end, Democrats included little of what Republicans wanted in the $1.9 trillion bill, and passed it with zero GOP votes.

“The president should have come back with a counteroffer, and if he will do that with the Republicans that are meeting with him in the White House tomorrow, I think we can get somewhere and have a much bigger infrastructure package than we were able to do under the last administration,” Wicker said on ABC’s “This Week.”

Pete Buttigieg, Biden’s treasury secretary, said that items included in the bill like child care and elder care are popular among Republican voters, according to polls, and encouraged GOP lawmakers to ease their opposition to including such items in the package.

“I think the president will have an open mind and be interested to hear other ideas on every dimension of the package. But as he said, doing nothing is not an option. And we also can’t wait too long,” Buttigieg said on “Fox News Sunday.”

The administration hopes Congress makes major progress on the package by Memorial Day and passes the bill by July 4.

Narrowing the bill to only include traditional infrastructure funding such as bridges was also dismissed by House Speaker Nancy Pelosi (D-Calif.), who said on CBS’s “Face the Nation” that she feels infrastructure includes education and housing investment.

“Overwhelmingly, this bill is about infrastructure in the traditional sense of the word. We also think that infrastructure—there’s a need for workforce development in order to have the workforce fully participate in how we go forward and child care so that women can be involved in that as well. So it’s physical infrastructure. It’s also human infrastructure that is involved,” she said.

Other pieces of the plan are: using $213 billion to build, preserve, and retrofit more than 2 million homes and commercial buildings; allocating $400 billion toward “expanding access to quality, affordable home- or community-based care for aging relatives and people with disabilities”; and investing $50 billion in the National Science Foundation.

Tax increases are how the president proposes paying for the package, including raising the corporate tax rate from 21 percent to 28 percent.

Democrats can turn to budget reconciliation to again cut out the need to garner Republican votes but Sen. Joe Manchin (D-W.Va.) has said he’s against using the method after the partisan passage of the COVID-19 package. Manchin has also opposed raising the corporate tax rate so high, pushing for a 25 percent rate instead.

Without reconciliation, Democrats need to reach 60 votes in the Senate. The upper chamber currently has 50 Republicans and 50 Democrats or nominal independents who caucus with the party.