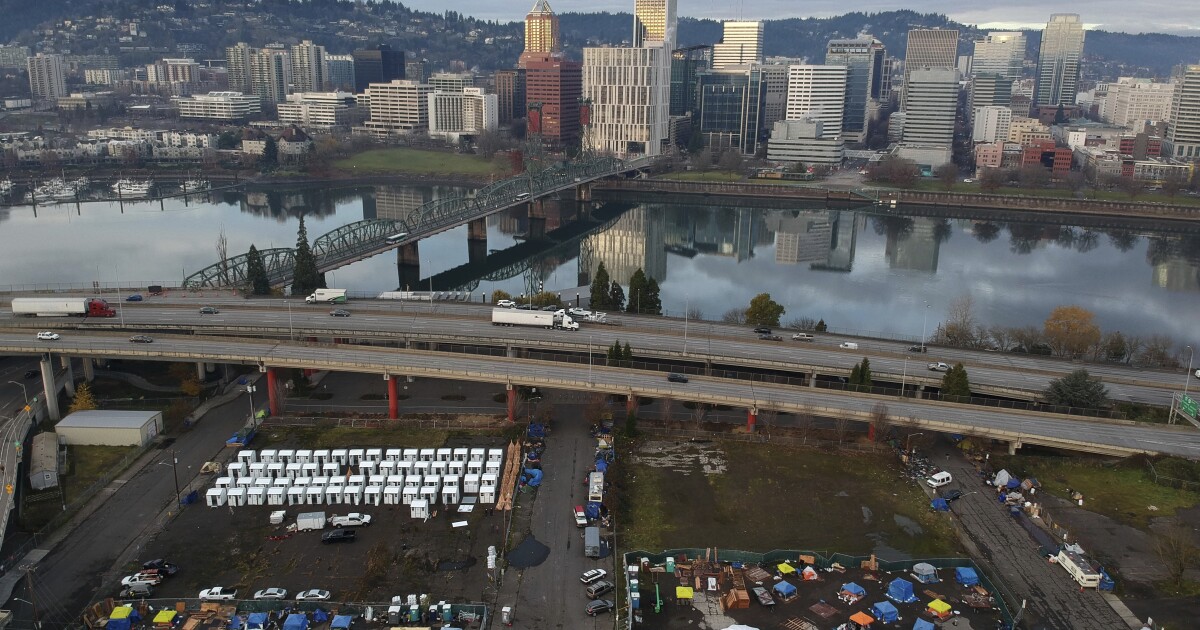 A class-action lawsuit accuses the city of Portland of throwing away the personal belongings of homeless individuals.

As first reported by Oregon Public Broadcasting, the Oregon Justice Resource Center, the OlsenDaines law firm, and the law office of Kelly D. Jones filed the lawsuit on behalf of the four homeless plaintiffs living in the city.

Under Portland's official policy, city bureaus responsible for dismantling unsanctioned campsites “must ensure humane treatment of homeless individuals and respect for property rights.” Those rights, the policy states, include retaining personal possessions “recognizable as belonging to a person and that has apparent use.” Items must be retained by the city at a designated site and returned to their owners within 30 days of inquiry.

The lawsuit alleges city contractors sweeping Portland's homeless camps did not catalog or return the clothing, tents, or bedding taken from the four plaintiffs. It claims such practices are “unlawful deprivations of property and liberty without due process of law” and violate the Fourteenth Amendment of the U.S. Constitution.

One of the plaintiffs, Jennifer Bryant, alleges that she was subjected to four sweeps in the past six months. Bryant ran a small wood-splitting business until she lost her work vehicle and home. She was living around Laurelhurst Park in November when she alleges sweepers seized her sleeping bag, bike, blankets, and the laptop she used to search for work. The next several months cost Bryant her job as a flagger after the city seized her work equipment. She claims the city never informed her where she could retrieve her property or documented them.

Another plaintiff, Scott Rupp, was also living near Laurelhurst Park in December when city contractors took two of his tents, a $99 car battery, his blankets, tools, and three bikes he was putting together. He alleges in the lawsuit the city took a ring given to him by his late wife.

Days later, Rupp retrieved his belongings at a city warehouse, finding some of his clothes and two backpacks which were “muddy, moldy, and mildewed.” Rupp never recovered the rest of his items and claims the city never took photos of his belongings or kept a written inventory.

The plaintiffs do not demand monetary compensation in the lawsuit. Instead, they request that the city enforce the law as it stands.

“All we are asking is for the City to follow the laws that are already in place,” said attorney Michael Fuller in a statement. “We hope the mayor will simply agree to the relief we're seeking, rather than waste hundreds of thousands of taxpayer dollars litigating against our team of volunteer attorneys for the next year.”

The office of Portland Mayor Ted Wheeler declined to comment, citing its policy of not commenting on pending litigation.

Portland's homeless sweeps have been conducted by unarmed city contractors rather than the police since 2012. Earlier this month, the city decided to give homeless camps 48 hours public notice before conducting a sweep and 24 hours for homeless individuals to pack up and disperse.

State governments around the country, including in Washington and Oregon, are attempting to reform their laws concerning homelessness. A bill in the Oregon Legislature would make it illegal for authorities to disperse homeless individuals for such “reasonable” actives as sleeping or eating in public spaces. It was passed out of the Senate Judiciary Committee by a vote of 4-3 on Monday.